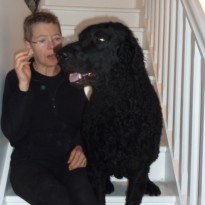 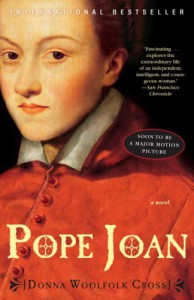 In conclusion, having completed this novel, having struggled through to the end, I can say I did not like it. I didn't like it from the start to the end. When I voice this opinion, I am obviously in the minority. I do appreciate that the author concluded with an informative author's note, which supports her belief that Pope Joan did exist, between the acknowledged Pope Leo IV and Pope Benedict III. I found her arguments undeniably convincing. I do not know whether Pope Joan existed or not, but I find the author's points valid. Before I can say Pope Joan didn't exist, I would need to have several questions answered.

However whether Pope Joan existed or not is irrelevant to how I judge this book. I did not like how the story was told. The characters were two-dimensional. There were the good guys and the bad guys. I vehemently disliked the cinematic tone characteristic of the entire novel. It was ridiculously romantic and melodramatic. Rarely do I so dislike a book. I have said enough. Below you will see what has annoyed me as I read through the book. I do not need to reapeat these criticisms. It is not the description of the era and the historical events that I am complaiming about. I am complaining about how the story was told. I would not choose to read another book by this author, but she doesn't need me since many others adore her writing.

Through page 204: I have read further. One aspect of the book that I think the author handles well is the description of the era - the religious beliefs, historical events, soothsayers, celebration of feast and market gatherings. What I am enjoying is the author's descriptive abilities, her description of the time and place. The struggles between the Saxons, Franks and Norsemen and between pagan and early Christian beliefs are included in the story. This I appreciate, but even here the depiction is rather cinematic. The reader cannot help but grasp the trends of the era.

Through page 148: Maybe my mood is off, but I find Pope Joan disappointing. I find the characters simplistic and feminism emphasized to an extreme. It also feels like a romance novel. And Luke, he is a wolf for heaven's sake. A wolf cub will not behave as he is portrayed in this novel. It is too cute. John(Joan's brother) is too stupid and jealous and bad, while Joan is so smart and forgiving and brave. You can stack the characters in two groups - the good guys or the bad guys.

Here is an excerpt about the white wolf cub, Luke. You judge. Isn't this meant for the movies?

She looked at Luke. "Will it work, Luke? Will it be enough to save me?"

He titlted his head inquisitively, as if trying to understand. It was a mannerism that always amused Gerold. Joan hugged the white wolf, burying her face in the thick fur ringing his neck. (page 142)

A movie has been made. Perfect!

Maybe it will improve. I do not give up easily. Oh, I have had bad luck lately. This will be my third "not so hot" book in a row.

Through page 98: I know this is a minor quibble but it is irritating. How can one put a cover on a book that completely missrepresents the person's appearance? In the book Joan has practically white-blonde hair, deep set eyes of a grry-green color and a thick fringe of eyelashes. Look at the cover on my book! How can you put this cover on this book?

It is a fun read, but I feel the primary message is feministic. On every page you are confronted with how horribly and unjustly women are treated. I know this is an accurate description of the times, but the message doesn't have to be pounded into our skulls.

So far the characters are rather simplistic. Joan is so curious and intelligent. John, her older brother is so unscholarly. Joan's father is such a missguided religious fanatic and her Mom, such a "Mom", loving her child deeply but also rather selfishly. I planned to just read this for fun. Stop being so critical, Chrissie!

Maybe I shoule read Mistress of the Vatican: The True Story of Olimpia Maidalchini: The Secret Female Pope next.